I wrote about this topic in 2015, but want to revisit it (with major changes and additions) considering recent events, and the truly dire situation developing in America. Regardless of the ultimate outcome of the election, America's elite - who control the political parties, the deep state, the mainstream media, academia, big tech, corporate board rooms, and pop culture - are working hard to fundamentally change America, and the rest of Western Civilization. It is one of the three existential threats that I have identified.

The elite want power, control, and the money that goes with it. They want to get rid of anything that stands in their way. This includes fair and honest elections, as we are witnessing right now. They want to get rid of the Constitution. They want to get rid of the people's fundamental rights (freedom of speech, freedom of religion, freedom of assembly, the right of self-defense, etc.) They want to replace true free-market capitalism with socialism (the elite do very well under socialism, the rest of us suffer greatly). They want to get rid of borders, patriotism, national identity, the Church, and even the traditional family unit and gender roles. They want people to have no loyalty to anything other than an authoritarian state that they control.
How do we fight back against this "new world order?" How do we protect ourselves and our families? Remove as much power from the elites as possible by building self-reliance as individuals, families, and communities. The less we need them, the less power they have over us.
This advice has been given in many different ways by many different people: Go Galt. Don't feed the beast. Get out of Babylon. Come out of her my people. Be in the world, but not of the world. In other words, get out of the system that they are creating.
Ultimately, the system they are building is unsustainable, and will collapse under its own weight (see what happened to the old USSR, for one example). But it will take a long time, and a lot of people are going to get hurt. By getting out of the system now, you will be less controlled by the elites and less exposed the dangers of their system. You will also be denying them the resources, opportunities, and influences they need in building their system. And by surviving the coming collapse, and there will eventually be a big one, you will be in a position to help restore traditional America, and perhaps even to build a better system for your children and grandchildren. But,  how can you get out of the system? Here are some ideas:
Get out of the cities and suburbs. This one is obvious, but many people just don't want to hear it. It may be possible to live in a big city without being tainted by Babylon, but it would be incredibly hard. And you are putting your family at risk in a number of ways by staying in the Big City. Move to a more rural area of the country. This doesn't have to be an isolated mountain retreat, but it defiantly isn't in a major city. The outskirts of a small town in a rural part of the country, particularly in a more conservative state, with no mega-cities nearby, may be an excellent location to build a new life. Preferably build it with a community of like-minded traditional Americans, even if you have to create that community yourself.

This and the other ideas presented here will be difficult to accomplish, and will require hard work and sacrifice to achieve. But the time of business-as-usual is past. You family's survival is worth the effort and sacrifice.
Get out of the doomed financial system. Stop using credit cards and get out of debt. Remember the saying "The borrower is slave to the lender." Greatly reduce your expenses. Develop useful skills that you could turn into your own business. Begin moving to a barter and cash-only basis as much as reasonably possible, minimizing your dealings with large banks (use credit unions or small regional banks for what banking needs you have). Turn some of your money into junk silver (or even a few gold coins if you have the money), but be sure to keep an emergency fund.
I have written many articles on financial preparedness that you can read on this website. Start with Financial Preparedness: Back to the Basics (it has some great debt busting ideas) and then explore the other articles.
Get your children out of the public school system. Separate your family from the failed public school system. Public schools are little more than indoctrination camps for the new system being built by the elites and progressives. One thing the lockdowns of 2020 have shown is that you don't have to depend on the public school system to teach your kids. Homeschool your children. Or at least send them to a good private or parochial school. Either way, stay actively involved in their education.
Get away from the corporate news media. The news media has gone from being merely biased to actually being willing and active participants in the fundamental change being forced on us by the elites. Even Fox News and the Drudge Report have sold out to the elites. But where can we get real news? The Epoch Times (website) is the best source of true, old-fashioned, real journalism, in my opinion. Whatfinger News (website) is a better news link aggregator than Drudge was in its heyday. Newsmax (website) and OAN (website) are emerging as good alternatives to broadcast and cable news. Other good sources of news include the Washington Times (website), Washington Examiner (website), and Breitbart (website), among others.  My news and education website, www.TimGamble.com, may also be of interest to you, as it concentrates on news and ideas of interest to survivalists, preppers, conservatives, and Christians.
Get out of liberal/progressive churches.  Liberal theology, modern feminism, and even socialism have found their way into many churches today, distorting scripture and the teachings of the early Church to fit modern ideologies and political correctness. Some people think the Church must change in order to be "relevant" to today's world or to appeal to younger people. Nothing could be farther from the truth. We should never compromise on the teachings of Jesus and the early Church in order to fit in with the modern world. Jesus taught us to be in the world, but not of the world (see John 15:19 and John 17:14-16). Modern liberal theology isn't just wrong, it is dangerous.
Get out of the pop culture and entertainment system. We are way over-entertained as a society. We spend massive amounts of time in front of screens watching shows and movies, playing video games, listening to music, or just surfing the Internet for fun. That entertainment is overwhelmingly of a leftist, worldly, viewpoint. The cumulative effects of all that exposure does have an impact on us, and especially our kids, although we like to pretend it doesn't. Think about canceling your cable or satellite TV. Or at least thoughtfully seek out wholesome entertainment. And quit watching the cesspool of professional sports. Maybe toss a football or baseball with your kid in the backyard instead.

Get out of our failing healthcare system. Government has made our healthcare system expensive, complicated, and intrusive. It will only become more so in the future, and likely will become rationed, too. Take care of your health. Learn to eat simple, healthy foods. Eat less sugar. Avoid over-eating (Americans typically eat huge serving sizes which is a major cause of the obesity problem). Get fit. Have a physically active lifestyle. Get adequate sleep on a consistent basis. Learn about first aid, as well as herbal and alternative medicine. The less you need the failing healthcare system, the better off you will be.

Get away from the attitude of dependence. Dependence on government and other "authorities" is a mark of the worldly system. Build self-reliance instead. The single most important thing you can do to survive any future chaos is to start taking responsibility for your own life now. I encourage preparedness and survivalism not so people can run away and hide at some remote retreat, but because the more self-reliant people are, the less they need government. And the less they need government, the less control government has over them. Learn skills. Especially learn useful skills that you could turn into your own business (yes, this is the second time I've mentioned this point - it is important). Get prepared for the worst that may happen (see my articles A quick, no frills, down & dirty guide to preparing for the End and My NEW Recommendations for Preparedness and Survival).

In the coming months, I will be talking about each of these points in much greater detail. Please bookmark and subscribe to this website so you don't miss any future articles. Your email subscription is free and can be entered in the sign-up field near the bottom of the right-side column, and all my social media accounts are listed at the bottom of this page.
(1) Image credit: Paulo Barcellos Jr Licensed under Creative Commons Attribution-Share Alike 2.0 Generic
------------------------------- 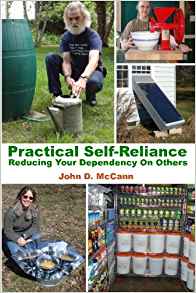 Practical Self-Reliance - Reducing Your Dependency On Others, by John McCann. Whether you live in the city, suburbs, or country, you can practice self-reliant methods of living. This book is an in depth look at practical ways you can reduce your dependency on others, and work towards a life of self-reliance. It includes sections on obtaining, preserving, storing, and preparing food, recycling and repurposing, skills and tools of the trade for self-reliance, getting out of debt, the importance of water, lighting and alternative power, sanitation and hygiene, staying warm and cool, transportation options, and more. For anyone who wants to work towards being self-reliant, this book, with over 250 photos and diagrams, offers many helpful suggestions and ideas.
---------------------
!!!!! Please subscribe to this website using the Follow By Email field at the bottom of the right hand column. Don't let Big Tech squash independent sites like this one! Also, please follow me on social media.
Websites
www.TimGamble.com - Daily news updates and threat assessments.
www.DystopianSurvival.com - Surviving the Fall of the American Republic and End of Western Civilization
Video Channels (Please subscribe - new videos start soon)
You Tube: https://www.youtube.com/user/croixian2
Bit Chute: https://www.bitchute.com/channel/ZObr3xTiK813/
Rumble: https://rumble.com/user/TimGamble
Social Media
Twitter: https://twitter.com/TimGamble
Parler: https://parler.com/profile/DystopianSurv/
GAB: https://gab.com/TimGamble
Spreely:  https://www.spreely.com/TimGamble
Facebook:   https://www.facebook.com/DystopianSurvival
Instagram: https://www.instagram.com/dystopiansurvival/
USA.Life: https://usa.life/TimGamble
Minds: https://www.minds.com/TimGamble/
at November 25, 2020