We, as preppers and survivalists, have much to learn from history. Of course, modern disasters and SHTF events won't be exactly like historical examples, but there are still lessons to be learned. We would be foolish to ignore the past. This article is the second in a series of articles I am writing on History for Preppers (see the bottom of this article for a link to the first article).

After Congress passed the Homestead Act in 1862, many Easterners moved West, eager for the opportunity to farm their own land. The 160 acres of land for free (if you lived and worked on the land for five years), along with the recently completed transcontinental railroad granting ready access, made their dreams seem easily within their reach. However, they quickly found out that they would face many problems and hardships.

One surprising hardship was money. Despite getting the land for free, there were still costs associated with starting and operating their farms. Large-scale farming in the late 1800s was expensive. Farmers had to buy seed, fertilizer, tools, and even machinery (gang plows & sulky plows appeared in the 1860s, deep well drilling equipment in the 1870s, and horse-drawn combines in the 1880s, just to name a few). They also had to buy their everyday household goods.

It is a romanticized myth that these farmers were 100% self-sufficient and produced all of their own food, clothing, furniture, cookware, and other goods. They still had to buy many goods elsewhere, most of which were produced back East. The added distance these goods had to be shipped only increased their cost (Amazon didn't offer free shipping back then). Even after mail-order catalog companies came into existence (Montgomery Ward in 1872; Sears and Roebuck in 1893) the costs remained relatively expensive, and the selection relatively limited, compared to the markets back East.

Many of these new farmers quickly went into debt setting up and operating their free homesteads. This debt became difficult to pay off after the success of the Homestead Act resulted in overproduction of crops causing the prices paid on the food markets to decline sharply under the glut.

The new farmers also faced problems caused by nature. Many parts of the Great Plains experience very hot, dry summers and extremely harsh winters. Both drought and insect blights were common.  Predators such as bears and wolves, as well as poisonous snakes, only added to the difficulties. Working the land was long, difficult, and tiring, and there was little help available beyond the farmer and his family.

With 160-acres plots, the nearest neighbor was quite a distance away. The isolated nature of the homesteads meant that farm life could be quite lonely and monotonous. Also, the isolation meant you were on your own. There was no way to call for help in an emergency, no 911 services, and no nearby neighbors to quickly rush to your aid when needed.

Finally, the new farmers, due to their isolation and relative poverty, lacked political power. And politics did affect them, despite their isolation. They were largely ignored by the politicians, and often taken advantage of by the railroads and banks with little or no recourse.

Rural agrarian lifestyles, represented by the modern homesteading movement, as well as the isolated bug-out retreat, offer many desirable benefits, but also many potential hardships. This article is in no way meant to discourage folks from pursuing their dreams of homesteading or leading self-reliant lives away from the big cities.  On the contrary, I share those dreams. Rather, I intend this article to de-romanticize the idea so that we can make realistic, practical plans with our eyes wide-open.

Researching this article, here are my take-aways:

Liked this article? You may also be interested in my article 1800s Backcountry Homesteads: Most Important Crop/Food Staple. 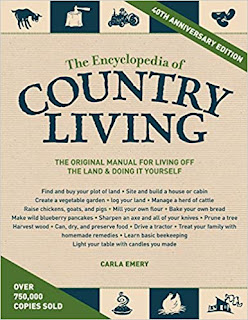 If you are interested in preparedness, gardening, homesteading, and country skills, check out The Encyclopedia of Country Living. This large book is a treasure trove of useful information on your journey to a simpler, more natural, more sustainable life of self-reliance.

GAB: @TimGamble - Mainly a back-up account for when Twitter bans me for being not being a leftist.
at March 19, 2020