The Five SHTF Events I Am Preparing To Survive

By Timothy Gamble (August 27, 2019)
I sometimes get the question "Tim, what are you preparing for? What do you really think is going to happen?" Well, here's my answer:

1) Life's Everyday Emergencies.  Life is full of smaller emergencies that fall short of being a civilization ending doomsday - house fires, wildfires, earthquakes, tornadoes, hurricanes, winter storms, power outages, car accidents, household accidents, recessions, an unexpected job loss, an unexpected illness, and even an unexpected death. These type of emergencies happen everyday to lots of people. They are so common, I guarantee that everyone reading this article will face some of these emergencies not just once, but multiple times in their lives. I certainly am preparing with these everyday  emergencies in mind.

2) The Threat Within. There are elites in both government and corporate board rooms that want to destroy America and western civilization for their own benefit. They believe traditional western civilization and culture is bad, that America in particular is evil, and that Biblical values and ethics are too restricting (for them). They hate capitalism, even though they personally have greatly benefited from it. They look down on the lower and working classes with great disdain (we are uneducated, unsophisticated, vulgar...). They want to create a world with no borders, where they are basically global citizens unrestricted by normal laws and ethics. They desire a large underclass (they need workers), a small middle class (they need some working professionals), and a small but extremely prosperous upper class made up of themselves and their fellow elites. They want to create an elite class who, by virtue of their obvious superiority, have absolute rule over the lesser classes.

Over the past decades, the elites have already done great damage. The introduction of centralized banking and fiat currency is one example, along with massive government debt they have generated. Destroying our educational system and dumbing down the people is another example. Their current attempts to restrict Free Speech and Free Press come straight out of the elites' desire to control the lesser classes, as does their desire to eliminate the Second Amendment, to ridicule patriotism, to end borders, to weaken the traditional family, and to greatly restrict parental rights. The attempt in recent decades to recast the broad Freedom of Religion our Founders gave us into the much more narrow freedom of worship is very much a part of their attempts to overcome traditional western civilization (see my article on the important difference between Freedom of Religion and Freedom of Worship and how the elites are weakening our freedoms in this regard).

The threat within may lead to massive economic, political, and social instability, along with a loss of rights, traditions, and culture. In fact, we are already starting to see these things, and it will only get worse.

3) The Stealth Invasion of the West. There is an active, but stealth, invasion of Europe and the Americas by Muslims through "peaceful" immigration, along with increasing (often violent) demands for various accommodations, privileges, special legal status, and the acceptance and even imposition of Sharia Law. This stealth invasion is well-documented by investigative journalist Leo Hohman in his book Stealth Invasion: Muslim Conquest Through Immigration and Resettlement Jihad. Also documenting this stealth invasion are Sam Solomon and Elias Al Maqdisi in their book Modern Day Trojan Horse: Al-Hijra, the Islamic Doctrine of Immigration.

Add to this stealth invasion the much higher birth rates of Muslims compared to native westerners, who have been convinced that large families are a bad idea (overpopulation, climate change), and you have a situation where western civilization is slowly being replaced by Islamic civilization.

It is worth noting that this stealth invasion by immigration is being fostered by western elites who have become so anti-Christian, anti-capitalism, and anti-traditional values, that they are willing to allow anything that might bring down traditional western civilization, so they might remake it to their benefit. Expect more economic, political, and social instability, violence, and loss of freedoms as this trend continues.

4) War with China. According to the historical concept known as the Thucydides Trap, which has been well-studied by academics and heavily discussed in diplomatic circles, a hot war leading to the destruction of either America or China is coming. Very simply, the Thucydides Trap states that when a rising great power (China, in this instance) threatens to displace an existing great power (in this case, America), a war that will almost certainly lead to the destruction of one of the great powers is almost always inevitable.

5) Death. Even if nothing I've talked about in this article comes to pass, one SHTF event is certain. I will die. And so will you. At some point, everyone one of us will die. Spiritual preparedness is an important part of my preps, and hopefully, it is a part of yours, too. You may be interested in my recent article on spiritual preparedness for more on this topic. 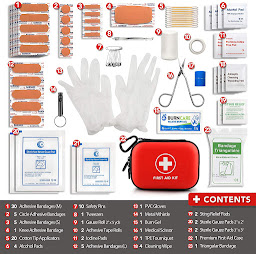 How to Survive the Emerging Dystopia - Seven Steps

By Timothy Gamble  Many people talk (justifiably) about how bad the year 2020 is. But 2021 may well be a worse year, no matter who wins th...