Adaptability - The Key to Urban Survival

Things can change quickly. This is especially true in an urban environment, with its high population density made up of highly diverse peoples. That diversity adds a large element of unpredictability to any situation. Large population numbers also mean greater problems with crime, violence, homelessness, mental illnesses, substance abuse, government interference, and other problematic aspects of society. These problems do exist in small towns and rural areas, of course, but typically not to the extent they do in  a large city.

Cities also tend to be on the leading edge of change, be it social, political, economic, or technological. These changes are often fast-paced with unpredictable consequences. Living in a large city requires an ability to constantly adapt to these changes. This will especially be true as chaos increases in any collapse scenario, be it slow or sudden. So, what does adaptability look like? How can we be more adaptable?

1) No whining. Change happens, like it or not. Whining won't stop it or make it better, and may make things worse as it distracts you from accepting and dealing with those changes.

2) Accept change.  Change happens. We don't have to like it, but we do have to deal with it. I suggest this version of The Serenity Prayer: "God, grant me the serenity to accept the things I cannot change, and the wisdom to know how to best deal with those changes."

4) Think big picture. Don't get so caught up on the details that you lose sight of the big picture. For example: In the big picture, it is important to make a living to provide for yourself and your family. How you make that living is details, not big picture. Any job or career will do, it doesn't have to be only a particular job or particular career. You may have to adjust to economic changes, and that is okay.

5) Think ahead. Don't just be reactive. Be proactive. Yes, "proactive" is a business buzzword, but it has important applications in all areas of life. Change rarely happens without any advance warning, if you are paying attention. Pay attention, then do something. Don't just wait around for someone else to deal with it for you. And don't just look for problems - look for opportunities, too.

7) Ask different questions. Seek different perspectives. Be curious. Be open-minded, but not so not so open-minded that your brain falls out. In other words, don't compromise your core, but be willing to listen to other perspectives. And remember the acronym ASK - Always Seek Knowledge.  Never get to the point where you think you've got it all figured out, and that no one else is worth listening to.

8) Make multiple plans. Don't just have a Plan A. You also need a Plan B. And a Plan C and even a Plan D are also useful. There's rarely just one way to a goal. Be willing to look for several different paths in case your first one becomes unworkable for some reason.

9) Stay positive.  This circles back to "stop whining" in point one, and goes beyond it, too. Don't let change and chaos get you down. Accept it, deal with it , and more on. All the while, stay positive. The Power of Positive Thinking, by Norman Vincent Peale, is one of the best selling self-help books of all-time for a reason - it works. The best way to stay positive when facing difficulties is by saying "I will overcome" and by focusing on dealing it, rather then letting it get you down and defeating you. 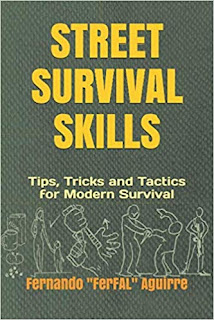 Fernando "FerFAL" Aguirre, author of the best seller The Modern Survival Manual: Surviving the Economic Collapse and a long-time advocate for preparedness & survivalism, has a new book out. Street Survival Skills: Tips, Tricks and Tactics for Modern Survival is based on his experiences during and after the economic collapse of Argentina. In it, he explains practical urban survival skills such as Situational awareness, home and street security, everyday carry, dealing with blackouts, survival kits and weapons, how to fight with a gun, knife, bare hands or improvised weapons, how to respond against a terrorist or mass shooter, barricade doors or how to breach them, how to stop a bleeding and carry a casualty, defensive driving, home remedies and many others practical skills.