Dystopia is Happening Now - Prepare for These Challenges

The argument I'm making with my new Dystopian Survival platform is that rather than heading for a Trigger Event (link is to my article), we have already begun an extended period of dystopian realities leading to the end of Western (Christian) Civilization as we know it. This process has been slowly gaining momentum for decades, and will continue for decades. Although we should prepare for short-term emergencies (weeks to months), we should also be preparing to survive decades, even generations, of dystopia.

Folks often compare the United States to the Roman Empire, expecting our collapse. While it may be a good comparison, most folks don't understand what that truly means. The Roman Empire took hundreds of years to fully collapse. It did not collapse in one sudden, fell swoop. Nor did it collapse due to one major SHTF event. Many generations of people had to live through, endure, the collapse. They experienced many SHTF events, no one of which ended it all. In fact, even to this day historians argue over exactly when the Roman Empire fell, how long it took, and what exactly caused it. But none suggest a sudden end, or any one trigger event. It took generations. And we still have generations of our slow collapse to endure. (Read my article on The Trigger Event, where I explain this in more detail.)


Dystopian Survival - Prepare for These Challenges

A Dysfunctional Healthcare System - Healthcare is already expense and our options are already limited by government, insurance companies, and medical corporations. The entire healthcare system is confusing, slow, and difficult to navigate. Many doctors have left the profession in disgust in recent years. There is already talk of a looming doctor shortage. Expect the healthcare situation to only get worse in the coming years. Expect rationing to become the new normal. Well, unless you happen to be among the wealthy elite: your healthcare will become much better thanks to scientific and technological breakthroughs.

A Dysfunctional Educational System - Where to begin? The education system is already failing. Our schools are already dangerous. Leftist ideology and political correctness already rule the curriculum. And, increasingly, schools are being used to extend government control over our children and interfere with parental rights, both during school hours and beyond. Sadly, it is not happening just at "other schools." It is happening at your kid's school, if you're willing to take an honest look. This situation extends to the college level, too. In fact, it may be even worse at the college level. But, as bad as this situation is, it will only get worse in coming years. Also, expect government to begin exerting even greater control over private schools, parochial schools, and even homeschooling, as the Left seeks to limit our "escape routes" from their control.

A Dysfunctional Jobs Market - Things might be looking good now, with unemployment at or near all-time lows. But times are changing, with technology, robots, and artificial intelligence displacing workers by the millions. Many companies are already reporting plans to replace large portions of their workforce within the next few years. This includes not just robots replacing blue collar workers on assembly lines, which has been happening for some time now, but artificial intelligence replacing many white collar professionals who previously thought their jobs safe. Sure, some new jobs will be created to service all this technology, but nowhere near the level of jobs lost to high tech. Those unprepared for the realities of this new high tech world are in deep trouble. Expect this to lead to a large shrinking of the middle class, which is already in trouble.

An End to Cash - There is a War on Cash happening, and we will see the end of physical cash within ten years or so. Maybe sooner. Bankers, economists, politicians, bureaucrats, and academics in the US and around the world are now calling for the end of cash, and the establishment of a cashless society. Instead of cash, everyone will eventually be forced to use debit cards and other forms of digital transactions instead of paper money or coins. There are three main reasons cash is being replaced: 1) using cash makes it harder for governments and corporations to track and control your behavior, 2) using cash makes it harder for governments to tax your every transaction, and 3) the bankers can't make money off cash that isn't deposited in their banks or run through their systems. A cashless system will run all money through banks, thus more profit.

On a related note: Expect Bitcoin and other cyber currencies to be heavily regulated or banned altogether. This is already starting to happen in the US and around the world, and will only grow in the coming years. Never underestimate government's desire to control everything.

Loss of Privacy - Advances in technology, government's ever-growing need for control, and the corporate world's desire for our data (to manipulate us into spending even more money), have already put our privacy at risk. Its been ten years since Facebook founder and CEO Mark Zuckerberg made news by saying  that people no longer have an expectation of privacy and that privacy was no longer a "social norm." Its even truer today, and will be even truer still ten years from now. The end of cash will be another major hit to privacy, allowing government and corporations to track our every transaction. This situation suits the Elites just fine, as it aids their plans.

Restrictions on Our God-Given Rights, including
Our unalienable rights are already being restricted, both legally and pragmatically. Laws, regulations, and policies are being enacted by government against "Hate Speech" and "Bullying" (who gets to define those terms?), which go far beyond what a somnambulant public realizes. Recent surveys show that as many as 70% of millennials dismiss the importance of free speech, thinking of it merely as an excuse for hate. Social media and Big Tech companies are now actively enforcing political correctness online, targeting traditional conservative and Christian viewpoints. Same goes for college campuses, once a bastion of free speech and diversity of thought, now desolate wasteland of rigid groupthink. So-called Red Flag laws, combined with the American Psychological Association's recent decision to define many traditional masculine traits - including ambition and competitiveness - as toxic, have given the Left inroads to confiscate guns without having to repeal the Second Amendment. Expect these moves against our God-given (unalienable) Rights to only increase in severity and success in coming years.

The above is just a short list of the challenges that are already starting to occur, and will only increase in the coming decades. Traditional prepper ideas of food storage and wilderness survival skills are good and useful, but don't go nearly far enough to survive the emerging dystopia. We are not just preparing to survive a temporary emergency, but also generations of societal upheaval and political, social, and technological suppression. What, then, should we do?  That is what Dystopian Survival is all about. so stay turned to this website (bookmark it!). I'll have much more to say in future articles. If you haven't yet read the first two core articles in the Dystopian Survival series, please do so:

1)  Dystopian Survival Skills - A New List for a Dangerous Future 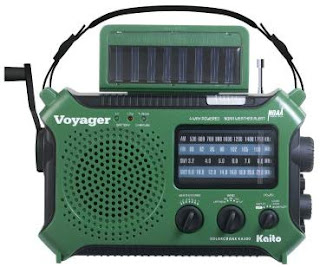 GAB: @TimGamble - Mainly a back-up account for when Twitter bans me for being not being a leftist.
at December 08, 2019