Final Pre-Election Preps? Here's What and Why

The election is Tuesday. Regardless of the outcome, things will only get much worse in the short-term.

If Trump loses, expect major violence, riots, and looting to break out as the Left "celebrates" their victory. Expect the Left, and especially organizations like BLM and Antifa, to be emboldened in their despicable behavior, now that their tactics have proven successful, and as they know they will never be held accountable for their actions. Expect democrats, along with their allies in Big Media, Big Tech, and the Deep State, to exact revenge on republicans, conservatives, Christians, and Trump supporters. In fact, they are already openly talking about this.

If Trump wins, expect major violence, riots, and looting to break out as the Left utterly lose their minds in anger. Expect the Dems, Deep State, and Big Media to not give up, no matter how overwhelmingly Trump wins. Expect screams, stories, and lawsuits over "Russian interference" and "voter suppression."  Expect pressure on electors to change their votes to vote for Biden in the Electoral College. Expect demands for investigations, impeachment, and article 25 removal. It will be like the aftermath of the 2016 election, only worse. Much worse.

Regardless of the outcome, expect the days and even weeks after the election to be especially dangerous. Physically dangerous. Even to those of us not living in big cities. There are easily triggered anti-Trump folks everywhere, and they are already angry, intolerant, hateful, and even violent.  BLM and Antifa are already threatening to "go out into rural areas." And, remember,,some Trump supporters with signs in their yards have received letters saying they have been added to a database and threatened with arson should Trump win. These people are dangerous, folks.

Given this situation, I want to be able to "hunker-down" for a week or two after the election, without having to go out in public. Those living in big cities, or other areas prone to riots and looting, should probably bug-out to a safer location (maybe go visit Grandma in her small town) for a week or so.

I also want to be especially vigilant of the security of my home and neighborhood during this time. To those ends, here are my final election preps, which I plan to accomplish before nightfall on Monday.

1- Make a last-minute grocery run. I have a nice store of food for the long-term, and hopefully you do to, but I will go to the grocery store Monday to pick up a few items that I would be buying this week anyway - particularly perishable items such as bread, milk, cheese, butter, eggs, and fresh fruits & vegetables. The idea is to stock up so I can stay in my home for at least a week. Think of it as last minute shopping that one might do right before an approaching winter storm hits. I will also make sure I have enough water stored for two weeks (actually, I have more). I'll also make sure I have enough food for my dog.

2- Refill prescription medications. I have no prescriptions, but my Mother does. I'll make sure she has enough for the next couple of weeks. I'll also make sure I have enough of any vitamins and supplements we take.

3- Get some cash out of the bank. It is always a good idea to have some cash on hand, in case the ATM network goes down, or if it becomes not safe to go out in public.
4- Make sure both my vehicles are fully gassed-up, and check the oil, tire pressure, etc.
5- Make sure my extra gas storage is full.  I keep several 5-gallon gas cans safely stored on my property, but away from my house.
6- Make sure I have plenty of batteries for my flashlights and emergency radio.
7- Review with my family, and others as appropriate, our plans for bugging-in security and safety, and when/how we will bug out if necessary. I will take a "night watch" and sllep during the day for at least the first few days, depending how how things do down. I will also be paying close attention to not only national news, but also local news.
8- Talk to my neighbors about keeping alert. We don't have an official neighborhood watch (I've tried to no avail), but several of us keep a watchful eye on the neighborhood, and know how to communicate with each other in an emergency.
9- I don't use propane or heating oil, but if I did, I would make sure I had full tanks.
This isn't a complete preparedness & survival plan, of course. You should already be working diligently on such a plan (if not, start here). But these are a few good ideas to do, ASAP.
------------------------ 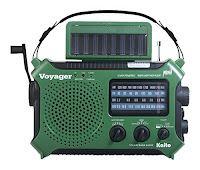